After research in its archives, the Windy City Times uncovered copies of Outlines newspaper and an IMPACT survey which were published in 1996 and summarized in various news articles during the final weeks of the 2008 presidential campaign. The articles, which contain quotes related to Obama’s position on same-sex marriage, have been revealed in a Windy City Times article: 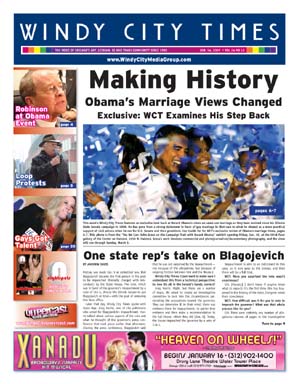 “During his run for Illinois state Senate in 1996, Barack Obama stated his unequivocal support for gay marriage, according to an exclusive story in the Jan. 14, 2009 Windy City Times newspaper. President-elect Obama’s answer to a 1996 Outlines newspaper question on marriage was: ‘I favor legalizing same-sex marriages, and would fight efforts to prohibit such marriages.’ There was no use of the phrase ‘civil unions’. [Outlines purchased Windy City Times in 2000 and merged companies.] This answer is among those included in this week’s Windy City Times feature on Obama’s evolving position on gay marriage. Windy City Times also includes his answers to the candidate questionnaire of IMPACT, at one time a gay political action committee in Illinois. In that survey he also stated his support of same-sex marriage.”

Obama now says, and said during his campaign for president, that he supports civil unions for gays and lesbians but believes marriage is between a man and a woman. He also believes in letting states decide whether or not same-sex marriage should be legalized.