Antony and the Johnsons, who won the 2005 Mercury Music Prize for their 2005 album I am a Bird Now, are back with a new album this month called The Crying Light, which New York magazine describes as “a lushly orchestrated evocation of an almost mythic personal loneliness.” Antony Hegarty is profiled in this week’s issue: 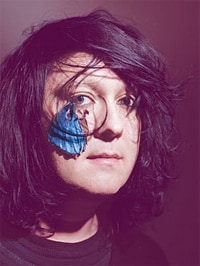 “Antony describes The Crying Light this way: ‘The focus of the album is on my relationship to the environment and the elements. The natural world.’ The song ‘Another World’ is the embodiment of this intention, and in a way it brings him back to where he started. ‘I wanted to write a song about the changing ecology,’ he says. It reminds him of when he came to New York and saw another ecosystem in decline. ‘This avant-garde queer underground, I got invested in it in a militant way because it was vanishing.’ He stops and thinks about this. ‘I have to write an essay on that one day: How the impact of AIDS on underground culture is like the impact, today, of humans on the world.'”

Listen to the first single off the album, “Another World”, AFTER THE JUMP…

You Gotta Give Them Hope [ny mag]