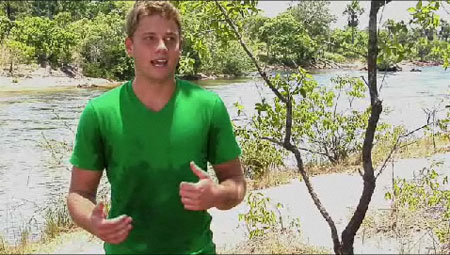 This is Spencer Duhm, a college student from Lakeland, Florida, who’s (as far as we know) the only gay contestant on the new season of Survivor: Tocantins. Tocantins is a state in central Brazil with many rivers and an equatorial climate.

His bio reads: “Born and raised in Lakeland, Florida and currently a student at the University of Florida, Spencer majors in telecommunications and minors in business and European union studies. Aside from being the recruitment chair for his UF crew team, where he also rows competitively, Spencer is a huge sports fan. Involved in myriad athletic activities since age 7, Spencer has developed a strong competitive streak and determination to achieve success. Rooting for his college Gators or beloved Cubs familiarized him with all of the peaks and valleys associated with being a contender, which may help him navigate the ups and downs associated with castaway life…Spencer is a gay, single man and currently resides in Gainesville, Fla. His birthday is December 20.” More at the source.

At 19-years-old, Spencer is the youngest competitor to ever appear on Survivor.

Watch his intro video, AFTER THE JUMP…

See Jeff Probst introduce the other competitors at GuyTVBlog.

Previous Post: « Gene Robinson to Maddow: ‘No One Had a Bigger Tent Than Jesus’
Next Post: Best Trip to the Principal’s Office Ever »