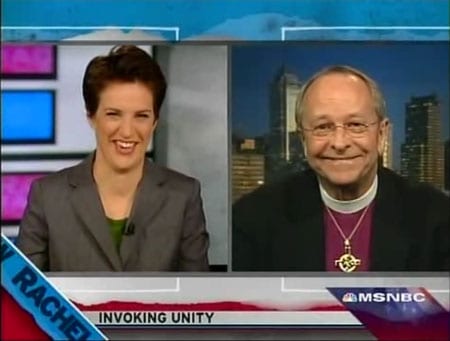 Robinson discusses his delivery of the opening ceremony invocation and participation in the inauguration, his prior meetings with Obama, the Rick Warren choice, same-sex marriage, and what’s to come for the Obama administration and gay people.

Said Robinson: “I think gay and lesbian people everywhere should feel very welcomed by this administration…I long for a government that respects the dignity of every human being, especially those who are less fortunate.”

NOTE: Corey Johnson and I will be bringing you coverage and interviews from D.C. during the inaugural weekend as we did from Denver during the DNC.

Watch Maddow’s segment, AFTER THE JUMP…