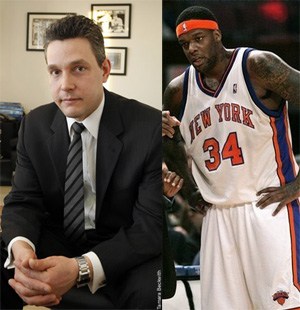 “Knick center Eddy Curry was slapped with a shocking sexual-harassment suit yesterday by his former driver, who claims the 6-foot-11 hoopster tried to solicit gay sex from him. Stunning court papers charge that Curry, a married father of several kids, repeatedly approached chauffeur David Kuchinsky ‘in the nude,’ saying, ‘Look at me, Dave, look’ and, ‘Come and touch it, Dave.’ Curry, 26, also made Kuchinsky perform ‘humiliating tasks outside the scope of his employment, such as cleaning up and removing dirty towels [into which Curry had ejaculated] so that his wife would not see them,’ the Manhattan federal court suit says. Kuchinsky, 36, who is straight and Jewish, also alleges racism, saying Curry hurled slurs at him, including ‘f- – – ing Jew,’ ‘cracker,’ ‘white slave,’ ‘white devil’ and ‘grandmaster of the KKK.'”

Said Curry: “It’s false, and everyone who knows me knows I’m not a racist. I’ve never made a comment like that, playing, or nothing. . . . That’s incredible, man.”