This is a bizarre one. 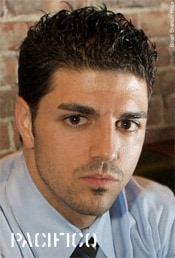 Ryan Pacifico, a straight, married Calyon in the Americas trader, says he was fired from his job for a minor infraction following prolonged anti-gay slurs from his boss over his vegetarian diet.

Said Pacifico: “It was bizarre.”

The NY Post reports: “‘You don’t even eat steak, dude. At what point in time did you realize you were gay?’ the suit quotes beef-loving boss Robert Catalanello as saying… Catalanello did everything he could to make Pacifico uncomfortable – including only ordering hamburgers and pepperoni and sausage pizzas for the weekly team lunches. ‘I’m only ordering burgers. If you don’t eat meat, too bad. I don’t care,’ he’s quoted as saying… The boss chose a steakhouse as a site for a team building dinner, and another broker suggested they go someplace else because Pacifico was a vegetarian. ‘He was like, ‘What’s wrong with you? We’re going anyway,” Pacifico recalled. When a coworker asked what Pacifico would eat, Catalanello said, ‘Who the f- – – cares? It’s his fault for being a vegetarian homo.'”