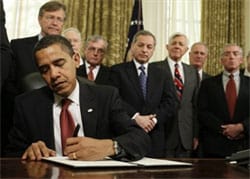 “With three executive orders and a presidential directive signed in the Oval Office Thursday, Obama started reshaping how the United States prosecutes and questions al-Qaida, Taliban or other foreign fighters who pose a threat to Americans. The centerpiece order would close the much-maligned U.S. prison at Guantanamo Bay, Cuba — a complicated process with many unanswered questions that was nonetheless a key campaign promise of Obama’s. The administration already has suspended trials for terrorist suspects at Guantanamo for 120 days pending a review of the military tribunals.”