Reuters interviewed several soldiers on a base in Iraq about their dissatisfaction with Obama’s plans to repeal “Don’t Ask, Don’t Tell”. 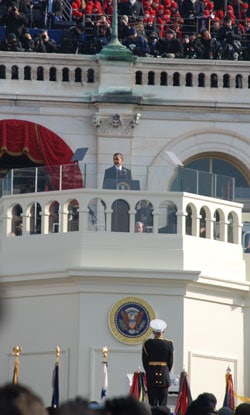 “Specialist Joseph Watson, from Texas, was ‘pretty excited’ to see America’s first black president sworn in, he said, after watching Obama’s inauguration on a big TV screen at the dining hall of Forward Operating Base Prosperity, in Baghdad. But the 30-year-old was a lot less excited about Obama’s inclination to repeal the ban on gay men and women serving. ‘Ah, I think that might cause a lot of problems,’ he said. ‘It’s a big moral issue. It’s giving the OK, saying that being gay is alright. Personally, I don’t think being gay is OK.'”

Specialist Justin Scharan, from Washington State, battled to contain a smirk on his reddening face when asked his view. ‘I’m Christian, so I really don’t believe it’s a good thing. But if it happens, there’s not much we can do,’ he said.”

“‘I don’t agree with it,’ said Staff Sargeant Tavar Cradle. ‘I think there’s other, bigger issues that could be dealt with.'”

They did find one soldier, who disagreed with the others, but he chose not to tell his name: “But one U.S. soldier, who asked not to be named or identified by rank, said he agreed with Obama on gays. ‘Put it this way: if they’re willing to fight for their country, to me, it doesn’t make a difference. Everybody has a right to defend their country, even if they are gay.'”

Surely Reuters could have found another.