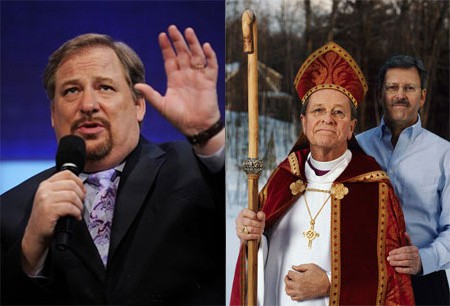 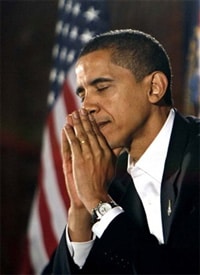 “Robinson, an openly gay Episcopal bishop, had reacted angrily to the selection of Warren, who opposes gay marriage, calling it a ‘slap in the face.’ But then Robinson was selected this week to give the invocation at the inaugural opening ceremony at the Sunday afternoon concert on the Mall. Today, Warren issued a statement praising Obama for selecting Robinson, saying the president-elect ‘has again demonstrated his genuine commitment to bringing all Americans of goodwill together in search of common ground. I applaud his desire to be the president of every citizen.'”

Robinson, who, unlike Warren, does not exclude certain groups of people from joining his church (Saddleback Church refuses gays unless they are “willing to repent of their homosexual lifestyle”), also recently said he’ll try to make his invocation as inclusive as possible:

“Bishop Robinson said he had been reading inaugural prayers through history and was ‘horrified’ at how ‘specifically and aggressively Christian they were.’ … ‘I am very clear,’ he said, ‘that this will not be a Christian prayer, and I won’t be quoting Scripture or anything like that. The texts that I hold as sacred are not sacred texts for all Americans, and I want all people to feel that this is their prayer.’ Bishop Robinson said he might address the prayer to ‘the God of our many understandings,’ language that he said he learned from the 12-step program he attended for his alcohol addiction. Bishop Robinson said that his partner of more than 20 years, Mark Andrew, would accept the Obama team’s invitation to join him in attending several inaugural events. The two had a civil union ceremony last summer in a New Hampshire church.”