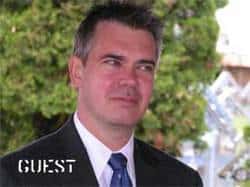 “The Bush administration had eased some rules, opening up some training to same-sex partners, but had resisted efforts to treat homosexual partners the same as married couples. But Clinton, during her confirmation hearings, indicated a greater willingness to explore the issue. ‘I think that we should take a hard look at the existing policy,’ Clinton said in response to a question from Sen. Russell Feingold (D-Wis.). ‘My understanding is other nations have moved to extend that partnership benefit.’ The issue achieved prominence in 2007 when a respected ambassador, Michael Guest, resigned after 26 years in the Foreign Service to protest the rules and regulations that he argued gave same-sex partners fewer benefits than family pets. Guest said he was forced to choose ‘between obligations to my partner, who is my family, and service to my country,’ which he called ‘a shame for this institution and our country.’ Guest was a member of Obama’s State Department transition team.”

Full text of the letter can be read, AFTER THE JUMP…

We congratulate you on your Senate confirmation, and we look forward to working with you in promoting America’s interests and strengthening our national security in this rapidly changing world. Whether assigned stateside or overseas, Civil Service or Foreign Service, active or retired, we are all proud to be serving our nation.

We, the undersigned and representing the diversity of the foreign affairs agencies, would like to bring to your attention a matter that concerns us all. All of us are troubled that our families are not all treated equally and with the same respect. We are concerned that access to the federal health care insurance program is denied to same-sex partners of employees serving in Third World countries with substandard medical care. We question the logic of leaving same-sex partners to fend for themselves during an emergency evacuation of a high danger post. We are embarrassed when the Department will reimburse a variety of moving expenses, including the cost of transporting a pet, when an employee is assigned overseas, but will not do the same for a same-sex partner. We are saddened that individual and community safety are put at risk because full language instruction is not available to same-sex partners. We are uncomfortable that same-sex partners receive less compensation and fewer benefits for performing exactly the same job inside the mission as an opposite-sex spouse, that is, when same-sex partners are given a chance to work.

An order from your office designating same-sex partners as Eligible Family Members (EFMs) could remedy many of the inequalities that these families face. Other remedies will require coordination between the Executive and Legislative branches.

Madam Secretary, we believe that no colleague of ours is a second-class colleague, and no colleague’s family is a second-class family. Given your commitment to protecting the safety and promoting the welfare of all Foreign Service families, we ask for your full consideration of our concerns and we hope that a dialogue aimed at ending this unequal treatment can be started.