Protestors gathered on Saturday in front of the upper east side residence of Mayor Michael Bloomberg in New York to draw attention to a series of false arrests of gay men by the NYPD at adult video shops in the city. 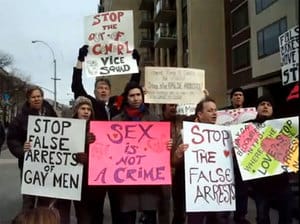 Last week, the group organizing the protest, called Coalition to Stop the Arrests, sent out a statement regarding the demonstration:

“In an overzealous and illegal effort to close down adult video stores in Manhattan, the New York Police Department has been found to be engaging in the false arrests of gay male patrons of these stores, charging them with prostitution. The cops then cite the establishments for condoning illegal activity and the City sues to shut them down as public nuisances. Scores of innocent men have been swept up in these false arrests, documented in the Gay City News. Young undercover cops go up to middle-aged gay men, cruise them, ask for consensual sex, and then offer to pay the older men to have sex with them. Though none of the men agree to the offer, they are then arrested by a gang of undercover cops and put through the system. None of the men have prior arrests. And while only 17% of male prostitutes arrested in NYPD’s Manhattan South district are over 40 years old, 66% of the men arrested at the Blue Door video store are. The legitimacy of these arrests is inconceivable. It also casts doubt on arrests at other targeted stores. These false arrests have been condemned by City Council Speaker Christine Quinn, Council Member Rosie Mendez and State Senator Tom Duane. Mayor Bloomberg must put a stop to these arrests now and bring the rogue cops engaging in these crimes to justice.”

Joe.My.God also has a slideshow of the demonstration. He reports: “On hand were a number of familiar LGBT activists: Brendan Fay, Gilbert Baker, Ann Northrop, Father Tony, Eric Leven, John Weis and journalists Andy Humm and Duncan Osbourne. It was Osbourne’s relentless pursuit of this story that brought the entire illegal campaign to light.”

Watch video by Father Tony, AFTER THE JUMP…

Protesters, and George Tynan Crowley reads a Valentine’s Day poem to the mayor of New York: