Yesterday, I posted that Bill Clinton had been asked by a coalition of gay and labor leaders to respect the boycott of Prop 8 supporter Doug Manchester’s Manchester Hyatt. Manchester gave a hefty $125,000 contribution to pass Proposition 8. Clinton is scheduled to speak to the International Franchise Association at the hotel this weekend. Now, it looks as though he will cross a picket line to do so: 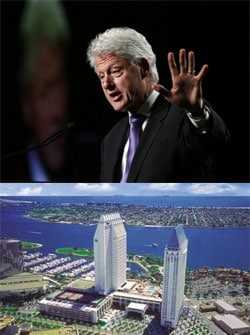 “But a spokesman for the former president said Thursday that Clinton will keep his commitment to the trade group. ‘He’s obviously sympathetic to this cause,’ Clinton spokesman Matthew McKenna said. ‘I don’t think you can name a leader in the world who has done more to advance gay and lesbian issues.’ McKenna noted that Clinton campaigned against Proposition 8 last year and said that if the hotel or owner Doug Manchester had extended the invitation – rather than the trade group – Clinton would not have accepted. Some who signed the letter were unhappy when told of Clinton’s decision. ‘It’s shameful and hypocritical that President Clinton wouldn’t stand by his principles and honor two groups that he’s historically supported – labor groups and gay rights,’ said Brigette Browning, president of Unite Here Local No. 30, who co-signed the letter. ‘I’m very surprised that he would put his corporate sponsors over basic human dignity,’ she said. Cleve Jones, a longtime gay-rights activist who founded the NAMES Project/AIDS Memorial Quilt, said he welcomed Clinton’s help fighting Proposition 8 but was skeptical of the president’s position. ‘The boycott has been in effect and very well publicized since July,’ said Jones, who also signed the letter. ‘He’s had ample foreknowledge of the situation.’ Supporters of same-sex marriage plan to gather outside the hotel Sunday at 11 a.m. and remain there throughout Clinton’s scheduled 12:30 p.m. speech.”