Sheri and Theresa, a lesbian couple who have been together for two years, were issued a marriage license today at a Freedom to Marry action event in Tucson, Arizona. Two men applied for a license at the same time with a separate clerk but were denied. 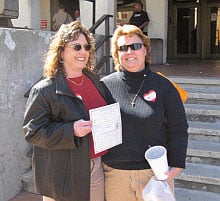 Rainbow Foot Soldiers reports: “The male couple were told that if they changed ‘female’ to ‘male’ on the form it would be invalid. Questioning the clerk they were told that if they left the female part intact they could issue the license but they would have to swear an oath that ‘all information contained on the form is true’ and that any incorrect or misleading information would be grounds for perjury. Since they would not commit perjury, the license was denied. Simultaneously a lesbian couple at a separate clerk requested a license and were told that if they swore the oath they would be ‘attesting to the information you have provided on the form.’ Since they had not written the genders they submitted the form and the license was issued to them. The issuance came as a complete surprise and shock to those assembled and seemed to concern the police present who gathered outside the door to the office and shortly ordered the gathering crowd of supporters and reporters to clear away from the front of the building.”

Watch video of the confused crowd gathered outside following the news, AFTER THE JUMP…

So are the genders part of the form already or were they written in, or were the two forms different? This is unclear at the moment, but what is clear is that a same-sex couple walked away with a license…

In November, Arizona voters passed Proposition 102 by a vote of 56% to 44%: “Only a union of one man and one woman shall be valid or recognized as a marriage in this state.” Same-sex marriage was already prohibited by statute in Arizona. 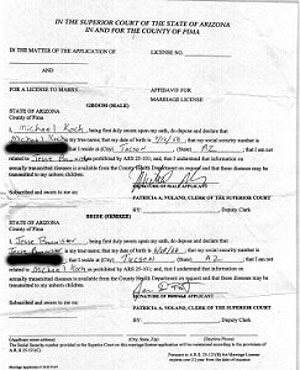 “Clerk of Court claims that the couple lied about both being women and that the license was issued as a result of “fraud.” This is not true. Michael and I were being denied a license at the same time two windows away. Originally the couple filled out a form with the same information we did by scratching out the gender portion. Then they returned for a second form that they filled out without the scratch out. Neither appear to be a man and they clearly told the clerk they were both female and she issued the license with her supervisor watching. The actual marriage license application. Note the genders are pre-printed on the form. Also, Marriage Equality USA has consulted a local family lawyer who says that the license application in Pima County is not legal as the statute does not require someone to swear to their gender. Therefore, the license should be valid because the form exceeds the statute laying out how the form should be worded.”

Update 2: “There seems to be a great deal of confusion in reports of this event with people claiming variously they wrote their genders and others claiming they found a loophole by leaving their genders blank. Neither is true. In this scan of the actual license application filled out by the male couple you will note that the genders are pre-printed and assigned on the form, although state law does not require this.”

Denise Heap of Join the Impact is being interviewed above. More raw video below: