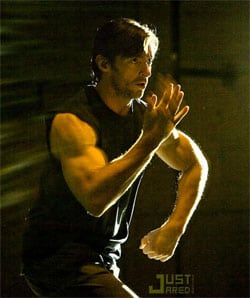 Rehearsal: Hugh Jackman song-and-dance number at Oscars to be directed by Baz Luhrmann.

Carrie Underwood can duck, but she can’t hide.

Westboro Baptist Church taking their hate abroad: “A notorious Christian fundamentalist church based in America has threatened to hold its first anti-gay rally in Britain to protest against a play about a homosexual student. Followers of the Westboro Baptist Church, a virulently homophobic denomination which pickets the funerals of Aids victims and soldiers in the US with ‘God Hates Fags’ billboards, have vowed to protest on Friday outside a sixth-form college in Basingstoke, which is putting on a performance of The Laramie Project.” 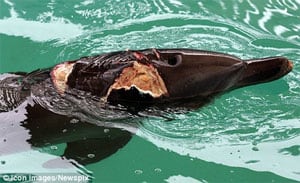 Dolphin cares for friend injured in shark attack until humans can take over.

Lady GaGa dresses next to the Pet Shop Boys at the Brits.

IndieWire profiles Milk screenwriter Dustin Lance Black: “I first heard there was this thing called an ‘out gay man’. You never hear anything like that in San Antonio.”

Gay Hong Kong couple jailed for visa fraud: “Malaysian Derek Chong, aged 29, and Hong Kong resident Andrew Lam, 51, organised for Chong to marry a Hong Kong woman so he could settle in the southern Chinese city, the department said in a statement. The couple paid the woman 25,000 Hong Kong dollars (3,200 US) to agree to the marriage in 2006, before Lam and Chong moved in together.” 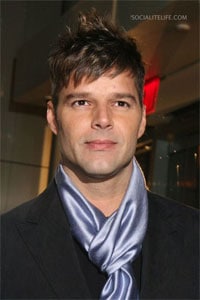 You think the Connecticut Chimpanzee attack sounded horrible? Read this.