Gary James, an Enid, Oklahoma restaurant owner, who is running for a spot on the City Council, has come under scrutiny for his racist and homophobic remarks, and the policies at his establishment, the Chicaro Club. 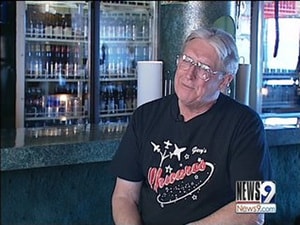 Reports News 9: “James, who is also running for a spot on the Enid City Council, is keeping out what he calls ‘trash’ and ‘people on welfare.’ Earlier this week, he told the local paper anyone who wears a hat inside a building is gay, and will be asked to leave. James said he isn’t homophobic or racist. He just refuses to allow anyone who makes him or his customers uneasy inside his business.”

Last week, Enid News reported: “James reportedly has asked black people and people he believes are homosexual to leave his establishment. James said he has asked people to leave the bar, but it is not based on race or sexual orientation. However, he does have some strong words to describe those he won’t allow in his establishment, calling them ‘trash’ and ‘faggots.’ … ‘If a racist is someone who doesn’t like unproductive trash, then it’s true. I’m talking about white, black, brown or yellow. I don’t like unproductive people,’ James said Monday. ‘People who know me, know better.’ He said he has never asked anyone to leave his club based solely on their race, and said he has asked many more white customers than black customers to leave because they caused a problem. He said he has asked customers to leave who are wearing clothes he does not approve of. ‘I don’t like girlie men. I’m not fond of men with all kinds of metal in their face,’ he said. ‘My customers don’t want them around, and I don’t want them around. I don’t consider that racist. I have black friends, but they are productive. Guys who come in with their britches down to their knees won’t get served in my place.'”

Given this information and what we know about politics in Oklahoma, we think he’s got a pretty good shot. The election is February 10. And by the way, Oklahoma does not prohibit discrimination based on sexual orientation.

Watch the local news report, AFTER THE JUMP…