Following a quick and stinging defeat of the first of several gay rights bills in its Common Ground initiative, Equality Utah has launched a multimedia campaign: 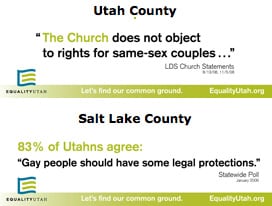 “On Sunday, close-to-full-page ads, touting the Common Ground Initiative, ran in The Salt Lake Tribune and Deseret News . On Monday, two billboards (right) sprouted along Interstate 15 and radio spots popped up on several stations…In the ads, Equality Utah points to LDS Church statements arging that there is “common ground” — short of gay marriage — between both sides of the debate — a savvy tactic in a state where Mormons make up about 60 percent of the population. The day after Proposition 8 passed in California — an LDS Church-backed ballot measure that outlawed same-sex marriage — the Utah-based faith released a formal statement, saying “the church does not object to rights for same-sex couples regarding hospitalization and medical care, fair housing and employment rights, or probate rights.’ In Equality Utah’s print ads, the first part — ‘the church does not object to rights for same-sex couples’ — is shown in bold.”

The bill that lost last week “would have amended state law so that financial dependents — besides spouses, parents and children — could sue if a breadwinner suffers a wrongful death” according to the Salt Lake Tribune. The paper reports that “the initiative’s remaining bills would create a statewide domestic-partner registry, outlaw employment and housing discrimination against gay and transgender Utahns, and repeal — if voters signed on — the portion of Amendment 3 that forbids civil unions.”

Listen to one of Equality Utah’s radio spots, AFTER THE JUMP…