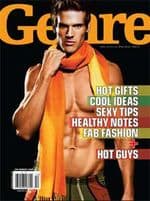 "Neal Boulton has quit as editor of the gay magazine Genre to pursue his dream of becoming a best-selling author. Boulton recently sold his motorcycle-trekking book, 'Sex Across America,' and is working on a memoir about being a married bisexual dad of two with a switch-hitting wife. 'I made the hard call to leave my friends at Genre. It's been a good run,' Boulton told us. 'Hell, Anna Wintour had to close Men's Vogue – we're still standing." He adds that his lifestyles Web site, BastardLife.com, has been 'seriously approached' by 'Penn & Teller: Bull[bleep]!' director Star Price about doing a show called 'BastardLife NYC.'"

It was recently reported that Avalon Equity, the major shareholder of Genre's parent company Window Media, has gone into receivership, and some  subscribers haven't received a current copy of the magazine in months.

Previous Post: « NYPD Makes Arrest in Hate Crime Killing of Ecuadorean Man
Next Post: Idol‘s Norman Gentle is So On to the Next Round »