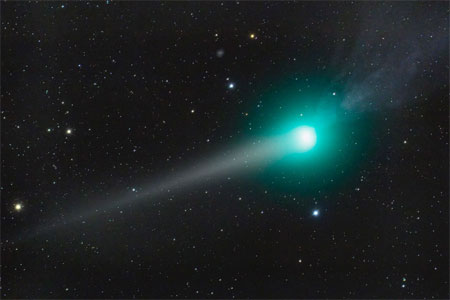 Some news for you space geeks.

Comet Lulin made its closest approach to Earth last night. It'll still be visible for the next few nights if you're away from a city. Directions to see it are here. The particularly spectacular shot above was taken from New Mexico. The comet actually has two tails, a dust tail pointing to the left and an ion tail pointing to the right which from Earth's vantage point appear to point in two opposite directions.

The shot below is Lulin seen from the Shenandoah National Park in Virginia on Monday. 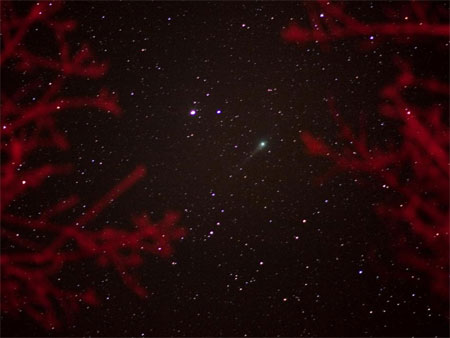 And the sequence of photos below was captured by an amateur photographer in Casco Bay, Maine earlier this month. It's a phenomenon named 'the Etruscan Vase' by Jules Verne:

"This stunning sequence of pictures captures a lunar mirage caused by the moon's light being warped by layers of air of different temperatures. As the rays graze the boundary between the layers, they are bent, creating the illusion of a second moon attached to the first. Within a matter of minutes, the two separate and the lower 'moon' slips back into the ocean. At its heart is an abnormally-warm layer of air just above the ocean, generated by the sun-warmed afternoon sea. On the day these pictures were taken, the water was a relatively balmy 39F (4C), while the air high above it was a rather more chilly 18F (-8C). When the full moon's rays hit the boundary between the hot and the cold, their path was warped, creating a mirage of a second moon in its wake." More here.

Finally, a pretty cool image was released today by European astronomers at the European Southern Observatory, on a mountaintop at La Silla in Chile:

"The object is actually a shell of gas and dust that has been blown
off by a faint central star. Our own solar system will meet a similar
fate five billion years in the future. It lies around 700
light-years away in the constellation of Aquarius, and can be dimly
seen in small backyard telescopes by amateur astronomers who call it
the Helix nebula. It covers an area of sky around a quarter the size of
the full moon."

It's nicknamed The Eye of God, for obvious reasons: 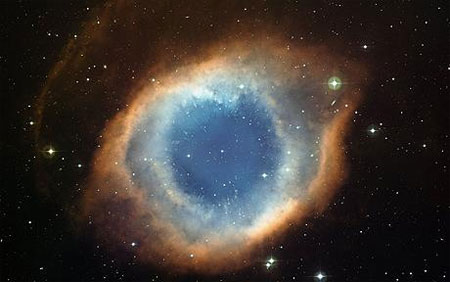