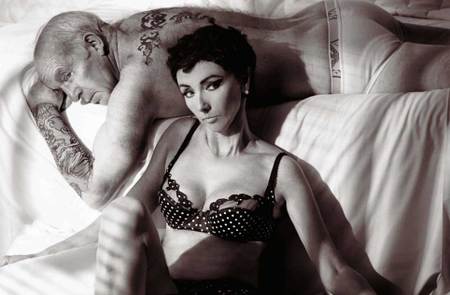 70-year-old British magician Paul Daniels has fought back with humor at tabloids who attempted to embarrass his wife Debbie by publishing unflattering photos of them on a beach vacation. He and his wife have posed in Closer magazine in a mock parody of a recent Emporio Armani underwear ad by Britain’s most famous tabloid target, Victoria and David Beckham.

That ad, AFTER THE JUMP…

“In the accompanying interview, Daniels declares that the couple’s private life is every bit as steamy as this picture suggests. ‘You don’t expect the lustful passion of the early days, but we haven’t let it die. We’re still passionate. What can I say? We like sex,’ he said. McGee confided that ‘one of the secrets to our marriage is that we make each other laugh every day.’ Daniels added: ‘That and my sexual ability. Debbie says we’ll stay married until I get it right.'”

The Beckham ads have also been imitated by British Olympic swimmer Mark Foster and parodied by British comic James Corden. 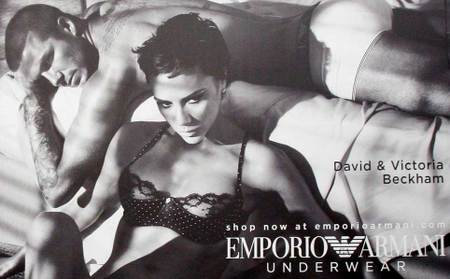