On her website, Chappaqua-based artist Maureen Mullarkey writes, in response to a question about why she uses gay pride parade imagery in her work: 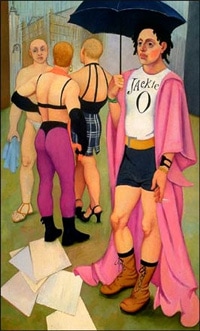 “Because it is a marvelous spectacle, an iconographic lode. There is so much to look at. Art is not about ‘appreciating.’ It is about looking. People get accustomed to viewing art through a filter of words: theories, press releases, the pieties of art appreciation. Spectacle cuts through the static…I’ve never really liked parades that much…But when the majorette is a middle-aged man in a tutu and sneakers you know you are not in Kansas and you might want to stay awake.”

But Mullarkey apparently has other thoughts about her subjects as well, which she expressed through a financial donation of $1,000 to pass Proposition 8, revoking marriage rights from millions of gay and lesbian Americans.

The New York Daily News reports: “Maureen Mullarkey, 66, made her sizable contribution to the National Organization for Marriage’s ‘Yes on 8’ fund in June, a Daily News review of campaign records found. The Westchester County woman was one of tens of thousands who poured a total of more than $83 million into the coffers of Proposition 8 support groups – money that helped convince California voters to overturn an earlier court decision granting gays the right to marry in the Golden State. Questioned outside her home in tony Chappaqua – the same town where Bill and Hillary Clinton live – she refused to discuss her donation last night. When asked how she could have donated money to fight gay marriage after making money from her depictions of gays, she just said, ‘So?…If you write that story, I’ll sue you,’ she said.”