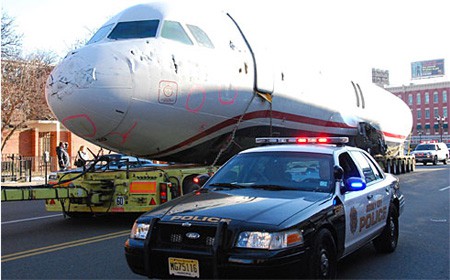 US Airways Flight 1549, which crashed in the Hudson River on January 15, was towed through the streets of Jersey City yesterday on its way to a salvage yard. 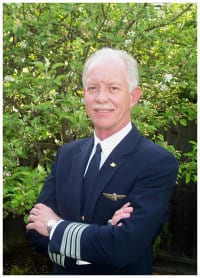 ESPN’s Rick Reilly scooped Katie Couric on her interview with Chesley (Sully) Sullenberger, the pilot of US Airways Flight 1549, upon seeing him at the Super Bowl. Couric’s interview is set to air February 8 on 60 Minutes.

Writes Reilly: “I had to ask him, ‘What was that like when you realized both engines were out?’ He thought about it for awhile and then said, slowly and deliberately, ‘Shocking. It was very quiet as we worked, my co-pilot and I. We were a team. But to have zero thrust coming out of those engines was shocking—the silence.’ How were you feeling inside? I asked. ‘Calm on the outside, turmoil inside.’ He kept calling the whole thing ‘surreal.’ His wife, Lori, said she and Sully have been opening letters every night that are so emotional, ‘it allows both of us to express emotion about it all. We both sit there and cry.’ I wanted to ask him one more question but he got swept away. It was going to be, ‘Do you mind emailing me the list of all your flights coming up in 2009? I’d like to be on them.'”

In related news, Steve Martin was on Letterman last night and joked that he was a passenger on Flight 1549. Not very good karma imho, considering many of the folks who survived that harrowing trip are still probably traumatized.

Watch it and read a passenger account I recently received, AFTER THE JUMP…

This is from a Partner at Heidrick & Struggles who was on Flight 1549.

As many of you now know, Gerry McNamara (New York/Charlotte) was on US
Airways Flight 1549 last week. We caught up with him to discuss the
harrowing incident and – in a departure from our usual format –
present his stirring account as told to us:

Thursday was a difficult day for all of us at the firm and I left the
Park Avenue office early afternoon to catch a cab bound for LaGuardia
Airport.

I was scheduled for a 5pm departure, but able to secure a seat on the
earlier flight scheduled to leave at 3PM. As many of us who fly
frequently often do, I recall wondering if I’d just placed myself on a
flight I shouldn’t be on!

Just prior to boarding I finished up a conference call with my
associate, Jenn Sparks (New York), and our placement, the CIO of
United Airlines. When I told him that I was about to board a US
Airways flight, we all had a little fun with it.

I remember walking on the plane and seeing a fellow with grey hair in
the cockpit and thinking “that’s a good thing… I like to see grey
hair in the cockpit!”

I was seated in 8F, on the starboard side window and next to a young
business man. The New York to Charlotte flight is one I’ve taken what
seems like hundreds of times over the years. We take off north over
the Bronx and as we climb, turn west over the Hudson River to New
Jersey and tack south. I love to fly, always have, and this flight
plan gives a great view of several NY landmarks including Yankee
Stadium and the George Washington Bridge.

I had started to point out items of interest to the gentleman next to
me when we heard a terrible crash – a sound no one ever wants to hear
while flying – and then the engines wound down to a screeching halt.
10 seconds later, there was a strong smell of jet fuel. I knew we
would be landing and thought the pilot would take us down no doubt to
Newark Airport. As we began to turn south I noticed the pilot lining
up on the river still – I thought – en route for Newark.

Next thing we heard was “Brace for impact!” – a phrase I had heard
many years before as an active duty Marine Officer but never before on
a commercial air flight. Click for more…

Everyone looked at each other in shock. It all happened so fast we
were astonished!

We began to descend rapidly and it started to sink in. This is the
last flight. I’m going to die today. This is it. I recited my favorite
bible verse, the Lord’s Prayer, and asked God to take care of my wife,
children, family and friends.

When I raised my head I noticed people texting their friends and
family….getting off a last message. My blackberry was turned off and
in my trouser pocket…no time to get at it. Our descent continued and I
prayed for courage to control my fear and help if able.

I quickly realized that one of two things was going to happen, neither
of them good. We could hit by the nose, flip and break up, leaving few
if any survivors, bodies, cold water, fuel. Or we could hit one of the
wings and roll and flip with the same result. I tightened my seat belt
as tight as I could possibly get it so I would remain intact.

As we came in for the landing, I looked out the windows and remember
seeing the buildings in New Jersey, the cliffs in Weehawken, and then
the piers. The water was dark green and sure to be freezing cold. The
stewardesses were yelling in unison “Brace! Brace! Brace!”

It was a violent hit – the water flew up over my window – but we
bobbed up and were all amazed that we remained intact.

There was some panic – people jumping over seats and running towards
the doors, but we soon got everyone straightened out and calmed down.
There were a lot of people that took leadership roles in little ways.
Those sitting at the doors over the wing did a fantastic job…they were
opened in a New York second! Everyone worked together – teamed up and
in groups to figure out how to help each other.

I exited on the starboard side of the plane, 3 or 4 rows behind my
seat through a door over the wing and was, I believe, the 10th or 12th
person out. I took my seat cushion as a flotation device and once
outside saw I was the only one who did….none of us remembered to take
the yellow inflatable life vests from under the seat.

We were standing in 6-8 inches of water and it was freezing. There
were two women on the wing, one of whom slipped off into the water.
Another passenger and I pulled her back on and had her kneel down to
keep from falling off again. By that point we were totally soaked and
absolutely frozen from the icy wind.

The ferries were the first to arrive, and although they’re not made
for rescue, they did an incredible job. I know this river, having swum
in it as a boy. The Hudson is an estuary – part salt and part fresh
water – and moves with the tide. I could tell the tide was moving out
because we were tacking slowly south towards Ellis Island, The Statue
of Liberty, and The Battery.

The first ferry boat pulled its bow up to the tip of the wing, and the
first mate lowered the Jacobs ladder down to us. We got a couple
people up the ladder to safety, but the current was strong pushing the
stern of the boat into the inflatable slide and we were afraid it
would puncture it…there must have been 25 passengers in it by now.
Only two or three were able to board the first ferry before it moved away.

Another ferry came up, and we were able to get the woman that had
fallen into the water on the ladder, but she just couldn’t move her
legs and fell off. Back onto the ladder she went; however, the ferry
had to back away because of the swift current. A helicopter arrived on
station (nearly blowing us all off the wing) and followed the ferry
with the woman on the ladder. We lost view of the situation but I
believe the helicopter lowered its basket to rescue her.

As more ferries arrived, we were able to get people up on the boats a
few at a time. The fellow in front of me fell off the ladder and into
the water. When we got him back on the ladder he could not move his
legs to climb. I couldn’t help him from my position so I climbed up
the ladder to the ferry deck where the first mate and I hoisted the
Jacobs ladder with him on it…when he got close enough we grabbed his
trouser belt and hauled him on deck. We were all safely off the wing.

We could not stop shaking. Uncontrollable shaking. The only thing I
had with me was my blackberry, which had gotten wet and was not
working. (It started working again a few hours later).

The ferry took us to the Weehawken Terminal in NJ where I borrowed a
phone and called my wife to let her know I was okay. The second call I
made was to Jenn. I knew she would be worried about me and could
communicate to the rest of the firm that I was fine. At the terminal,
first responders assessed everyone’s condition and sent people to the
hospital as needed. As we pulled out of Weehawken my history kicked in
and I recall it was the site of the famous duel between Alexander
Hamilton and Aaron Burr in 1804. Thankfully I left town in better
condition than Mr. Hamilton who died of a mortal wound the next day! I
stayed with my sister on Long Island that evening, then flew home the
next day.

I am struck by what was truly a miracle. Had this happened a few hours
later, it would have been pitch dark and much harder to land. Ferries
would no longer have been running after rush hour and it would not
have been the same uplifting story. Surely there would have been
fatalities, hypothermia, an absolute disaster!

I witnessed the best of humanity that day. I and everyone on that
plane survived and have been given a second chance. It struck me that
in our work we continuously seek excellence to solve our client’s
leadership problems. We talk to clients all the time about the
importance of experience and the ability to execute. Experience showed
up big time on Flight 1549 as our pilot was a dedicated, trained,
experienced professional who executed flawlessly when he had to.

I have received scores of emails from across the firm and I am so
grateful for the outpouring of interest and concern. We all fly a
great deal or work with someone who does and so I wanted to share this
story – the story of a miracle. I am thankful to be here to tell the
tale.

There is a great deal to be learned including: Why has this happened
to me? Why have I survived and what am I supposed to do with this
gift? For me, the answers to these questions and more will come over
time, but already I find myself being more patient and forgiving, less
critical and judgmental.

1. Cherish your families as never before and go to great lengths to
keep your promises.
2. Be thankful and grateful for everything you have and don’t worry
about the things you don’t have.
3. Keep in shape. You never know when you’ll be called upon to save
your own life, or help someone else save theirs.
4. When you fly, wear practical clothing. You never know when you’ll
end up in an emergency or on an icy wing in flip flops and pajamas and
of absolutely no use to yourself or anyone else.