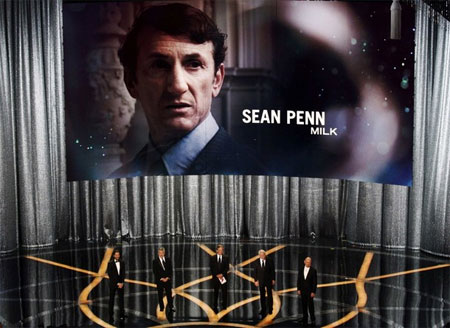 Slumdog Millionaire took the Best Picture last night at the Academy Awards (along with 7 other trophies), but it was the speeches from Sean Penn and Dustin Lance Black, who took home Oscars for Best Actor and Best Original Screenplay, respectively, for Milk, that many will remember. Both cited the inequalities faced by gays and lesbians in America today, and were greeted with boisterous rounds of applause.

It was a satisfying upset win for Penn over Mickey Rourke, who was largely expected to walk to the podium after taking award after award all season long for his role in The Wrestler. The three other acting awards went to Kate Winslet for The Reader, Heath Ledger for The Dark Knight, and Penelope Cruz for Vicky Cristina Barcelona. 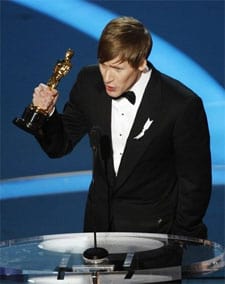 "Oh my God. This was, um. This was not an easy film to make. First off, I have to thank Cleve Jones and Anne Kronenberg and all the real-life people who shared their stories with me. And, um, Gus Van Sant, Sean Penn, Emile Hirsch, Josh Brolin, James Franco, and our entire cast, my producers, Dan Jinks and Bruce Cohen, everyone at Groundswell and Focus, for taking on the challenge of telling this life-saving story. When I was 13 years old, my beautiful mother and my father moved me from a conservative Mormon home in San Antonio, Texas to California and I heard the story of Harvey Milk. And it gave me hope. It gave me the hope to live my life, it gave me the hope to one day live my life openly as who I am and that maybe even I could fall in love and one day get married. I want to thank my mom who has always loved me for who I am, even when there was pressure not to. But most of all, if Harvey had not been taken from us 30 years ago, I think he’d want me to say to all of the gay and lesbian kids out there tonight who have been told that they are less than by their churches or by the government or by their families that you are beautiful, wonderful creatures of value and that no matter what anyone tells you, God does love you and that very soon, I promise you, you will have equal rights, federally, across this great nation of ours. Thank you, thank you, and thank you God for giving us Harvey Milk" 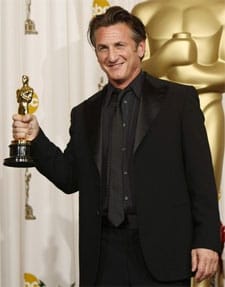 "You Commie homo-loving sons of guns! I did not expect this, but I — and I want to be very clear that I do know how hard I make it to appreciate me. Often. But I — I am touched by the appreciation and I hoped for it enough that I scribbled down — so I have the names in case you were Commie homo-loving suns of guns. And so I, I wanted you to thank my best friend Sato Masuzawa. My circle of longtime support, Mara, Brian, Barry and Bob. The great Cleve Jones. Our wonderful writer, Lance Black. Producers Bruce Cohen and Dan Jinks. And particularly, as all us actors know, our director either has the patience, talent and restraint to grant us a voice, or they don’t, and it goes from the beginning of the meeting to through the cutting room, and there is no finer hands to be in than Gus Van Sant. Finally, for those — two last finallys — For those who saw the signs of hatred as our cars drove in tonight, and, I think that it is a good time for those who voted for the ban against gay marriage to sit and reflect and anticipate their great shame and the shame in their grandchildren’s eyes if they continue that way of support. We’ve got to have equal rights for everyone. And there are these last two things. I’m very, very proud to live in a country that’s willing to elect an elegant man President. And a country, who for all its toughness, creates courageous artists, and this is in great due respect to all the nominees. But courageous artists who, despite a sensitivity, that sometimes has brought enormous challenge. Mickey Rourke rises again, and he’s my brother. Thank you all very much."

Speech clips, and full list of winners, AFTER THE JUMP…