A student who was stopped from giving a speech in support of Proposition 8 during a public speaking class and threatened with expulsion at L.A. City College is suing the school, the L.A. Times reports: 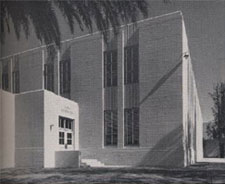 “Student Jonathan Lopez says his professor called him a ‘fascist bastard’ and refused to let him finish his speech against same-sex marriage during a public speaking class last November, weeks after California voters approved the ban on such unions. When Lopez tried to find out his mark for the speech, the professor, John Matteson, allegedly told him to ‘ask God what your grade is,’ the suit says. Lopez also said the teacher threatened to have him expelled when he complained to higher-ups. In addition to financial damages, the suit, filed last week in U.S. District Court in Los Angeles, seeks to strike down a sexual harassment code barring students from uttering ‘offensive’ statements…Lopez, a Los Angeles resident working toward an associate of arts degree, is described in the suit as a Christian who considers it a religious duty to share his beliefs, particularly with other students. He declined to comment. Matteson could not be reached…The suit names the Los Angeles Community College District, which operates nine campuses including L.A. City College; its board of trustees; Matteson; and various administrators. Lopez is asking for a jury trial.”