Students at the University of Colorado Boulder are planning a pre-Valentine’s mass make-out session at a fountain on the school’s campus tomorrow: 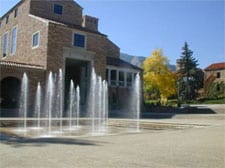 “Student organizers say the demonstration, entitled ‘Make Out Stake Out,’ will give gay, lesbian, bisexual and transgender students — along with their straight allies — an avenue to playfully challenge societal norms about public displays of affection. If all goes as planned, at precisely 11:53 a.m., a ‘flash mob’ of student couples of varying sexual orientations suddenly will appear at the UMC fountain square, make out for two minutes — and then disperse. ‘We’re trying to remove the stigma that surrounds same-sex affection in public and, more importantly, the misconception that if you are queer and you are expressing affection in public that you are rubbing it in people’s faces,’ junior Spencer Watson said.”

If anybody gets photos, please send them to us.