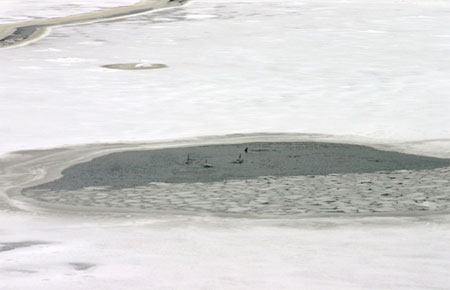 A group of five dolphins were trapped this week for more than three days by pack ice after they presumably chased fish into a harbor at Seal Cove, Newfoundland.

"The town had called for an icebreaker to free the white-beakeddolphins, only to be told that none were available, and even if onewas, that it could push broken ice into the weakened mammals, furtherinjuring or killing them. Yesterday, some of the dolphins haddisappeared, feared dead. Four remained in the morning; by midday, itwas three."

16-year-old Brandon Banks then took matters into his own hands and launced a five-hour rescue: 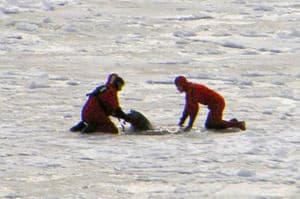 "And so it was yesterday that the young Mr. Banks and four otherlocals hopped into a 17-foot fibreglass boat – with stainless steelpropeller blades, it was a do-it-yourself icebreaker… They launched theboat into the icy cove, and set about clearing a way out for thedolphins. They rocked back and forth against the ice, breaking it apart andworking a small path 250 metres long into the enclosure while the threeremaining dolphins circled around. Once near them, Mr. Banks donned a red dry-suit and hopped into thefrigid February ocean waters, face to face with the trapped dolphins tofree them. 'It was real cold, but we didn't feel it because of the suits," he said. In the boat, they carved out their path into the free ocean water.Two of the dolphins followed without trouble. The other two had leftearlier – presumed freed or dead – and only one was left in the cove,weakened. 'Two got out through, and the next one was too tired,' said theyoung Mr. Banks, who leapt into the water to hold onto the 180-kilogramdolphin, called a jumper by the locals. 'I kept him up with my legs, keep his head up from under the water.' Meanwhile, many people from the town lined the cove, taking in what was happening a couple of hundred metres out onto the ice."

Clips, AFTER THE JUMP…