Equality Utah’s ‘Common Ground’ initiative has not seen much success. Two of its bills have failed already. The first failed in committee on the second day of the legislature, and the second, which would have erased the portion of the state’s same-sex marriage ban forbidding civil unions, was pulled. But the set of initiatives did receive support yesterday from Utah’s Governor: 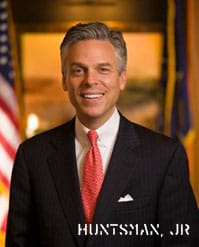 “Gov. Jon Huntsman Jr., a spokeswoman said Monday, backs Equality Utah’s Common Ground Initiative, a legislative effort that would provide some rights to gay and transgender Utahns. Even more, the Republican governor favors civil unions. It’s a position that runs counter to his political party and against the majority of Utahns — 70 percent of whom oppose civil unions, according to a recent Salt Lake Tribune poll. ‘He’s long supported many of the ideas that are presented within the Common Ground Initiative,’ said Lisa Roskelley, the governor’s spokeswoman, noting her boss waits to endorse specific bills officially until presented to him in final form. ‘He supports civil unions.’ It’s doubtful Huntsman’s backing will lead to civil unions getting past the conservative Legislature. And it may not help the rest of this year’s gay-rights legislative push, which already has shrunk from four bills to two.”

As far as the remaining half of the gay rights initiative: “Of the remaining Common Ground bills, one would make it illegal to fire or evict someone for being gay or transgender. The other would allow two, unmarried cohabiting adults to file a “declaration of joint support” with their county recorder and gain benefits of inheritance and medical-decision making.”

Previous Post: « Cop Suing Everybody to Get Out of Village People, for Good
Next Post: Edilson Nascimento is Made in Brazil »