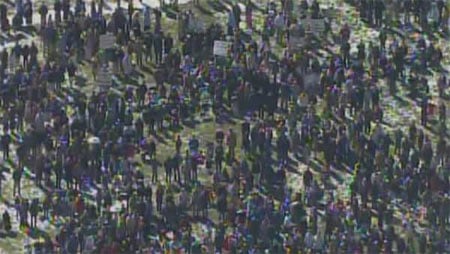 Hundreds of people gathered outside the state capitol in Raleigh, North Carolina to attend a rally sponsored by Return America and NC4Marriage yesterday:

"According to its website, Return America is dedicated to many issuesrelated to Judeo-Christian values, including the sanctity of marriageand family values. NC4 Marriage defines itself as 'a statewide coalition of voters,churches, ministry and denominational leaders, policy organizations,and political leaders who are working together to get a MarriageProtection Amendment bill passed by the General Assembly.' Both groups hope to see the Defense of Marriage Act added to November's ballot and ultimately added to the state constitution." 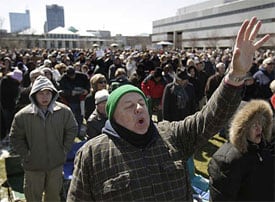 The News & Observer said the crowd was made up of mostly Baptists: "Two well-known conservative Christian commentators who spoke at therally described a breakdown of society should gay couples be allowed tomarry — including a rise in single-parent households and in the numberof dependents wanting Social Security and health insurance benefits. David Gibbs III, a lawyer who in 2005 fought to keep brain-damagedTerri Schiavo on life support, told rally participants gay marriagewould 'open the door to unusual marriage in North Carolina. 'Why not polygamy, or three or four spouses?' Gibbs asked. 'Maybe people will want to marry their pets or robots.'"

The rally was in support of North Carolina lawmaker Jim Forrester's recent proposal for a constitutional amendment declaring marriage between a man and a woman.

I've posted a short video of one of their earlier rallies, AFTER THE JUMP…