A pretty astonishing rate given the outright rejection of such "therapy" by the mainstream medical community, and the warnings of its dangers. 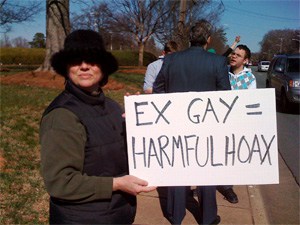 The Independent reports: "A study of more than 1,400 psychiatrists and therapists in BMCPsychiatry found that 222 (17 per cent) said they had treated at leastone client to alter their homosexual feelings at some point. Theresearchers expected the cases to be concentrated in the past, but the400 to 500 cases recorded were distributed evenly across the decades. 'It is happening up to the present moment,' [Professor Michael King, of the University College Medical School] said. Itmight only be the 'tip of the iceberg'."

Added King: "Heaven knows what they do. We didn't attempt to ask them because thereis no evidence that anything works. We didn't expect it to be happeningat this rate and we are really rather concerned. It ought to stop. Itis distressing and harmful and there is absolutely no evidence it works."

A video I posted back in January by Peterson Toscano, an "ex-gay" survivor, who talks about the 17 years he spent attempting to "cure" his homosexuality, AFTER THE JUMP…