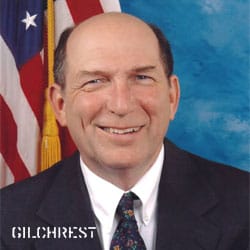 "Gilchrest came out of political retirement to share a personal view of
the issue — his brother David is gay and married to his longtime
partner in Massachusetts. Gilchrest, who opposed changing the U.S.
Constitution to ban gay marriage, argued that the unions should be
allowed as a matter of 'social justice, civil rights and a more viable
democracy.'"

Gilchrest was joined by Travis Britt, an African-American civil rights activist and widower of the late Sen. Gwendolyn T. Britt. Said Britt: "Any couple in love should have the right to marry. Civil
rights for gays and lesbians are just as important as civil rights for
anybody else."