The novelist, poet, and playwright James Purdy has died. 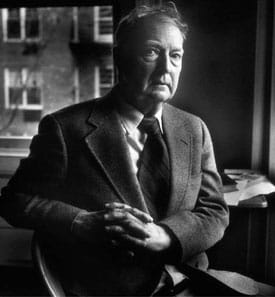 The NYT: "He was 94 and, after a period of declining health, had recently
broken his hip, said his close friend and assistant, John Uecker. Wayward and unclassifiable, Mr. Purdy, the author of the novels 'Malcolm' and 'The Nephew,' labored at the margins of the literary
mainstream, inspiring veneration or disdain. His nearly 20 novels and
numerous short stories and plays either enchanted or baffled critics
with their gothic treatment of small-town innocents adrift in a corrupt
and meaningless world, his distinctive blend of plain speech with
ornate, florid locutions and the hallucinatory quality of his often
degraded scenes."

Reed Woodhouse notes: "James Purdy was a great and strange writer, out of kilter with nearly
all his literary contemporaries or equals. Mere realism did not
interest him, but neither did post-modern whimsy. Gay literature of the
Stonewall era, and even more of the find-a-lover-and-adopt-a-child era,
left him cold. Conventional judgments of taste do not apply to him: he
is capable of writing as badly, and as sublimely, as Wordsworth. He is
not ironic. That is why, even for his admirers, he remains troubling.
He wrote, as he told me in an interview I published in the then Harvard
Gay and Lesbian Review, 'for the soul'."