Last night on Survivor: Tocantins, gay contestant Spencer Duhm was asked if he's interested in any of the women on the show, a question he deflected, and later explained: 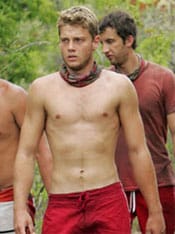 "My tribemates are not aware that I'm gay. I haven't told them. Only because in the culture that we live in, there's nothing really to gain, or not much to gain from people finding out that you are gay. I don't like hiding it though. I would like to be able to have those conversations when we're talking about girls. I wouldn't mind, you know, makin' like 'Spencer, well what type of guy do you like' or something, but I know that that's not the best option for me in the game at this point, so…"

Survivor: China winner Todd Herzog revealed earlier this week that he and Duhm are dating.

UPDATE: Reality Blurred reports that Spencer apologized to Charlie Herschel for remarks he made earlier in the season about sounding gay: "I had completely forgotten about that interview entirely, so when Iread it I was mortified, my jaw just dropped. I was yelling at thecomputer screen, I was like, ‘Shut up, Spencer, shut up. Stop talking.’And when I read the stuff about Charlie I was so upset with myself, andso I immediately contacted him saying, ‘I sincerely apologize, I was acomplete ass, I don’t know why I said any of that, it was completelyout of line, I don’t even know you.’"

No SPOILERS (but warning, comments MAY contain spoilers). Watch it (starts at about 4:29), AFTER THE JUMP…

Previous Post: « If You Were Wondering What the Future Holds, it’s Zac Efron
Next Post: Former GOP Rep. Testifies for Marriage Equality in Maryland »