Following the Britney Spears concert at the Prudential Center in Newark, NJ on Saturday night, Joshua Kehoe, 25, and his partner, Bobby Daniel Caldwell, 36, say they were attacked by a group of 15 to 20 youths, the Star-Ledger reports: 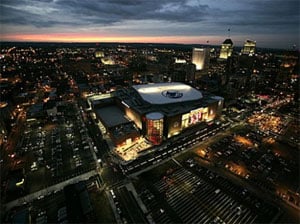 "Kehoe said that the attackers deliberately targeted him and his
partner because they were gay, but Paul Loriquet, a spokesman for the
Essex County Prosecutor's office said that police did not believe the
incident was bias related. 'They were saying words like 'faggot',' Kehoe said, 'No matter how you look at it, it is a hate crime.' Kehoe said a security guard at a nearby building and two passersby
called the police. They waited about 45 minutes for police to arrive,
according to Kehoe even though about three squad cars passed the scene.
When cops finally arrived, Caldwell was taken to University Hospital
with his jaw broken in two spots."

Kehoe says he is hopeful nearby surveillance cameras captured the attack.