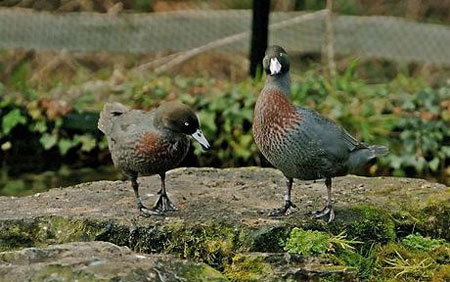 Blue Ducks, a threatened species which are native to New Zealand, look set to die out in the UK after Cherry, the last remaining female at a bird sanctuary in West Sussex, failed to mate with two males, named Ben and Jerry, at the same compound.

Why? The males are in love with each other:

"Neither male duck appeared interested and are now inseparable at the
Arundel Wetland Centre, leaving Cherry to her own devices. Centre warden Paul Stevens said he was disappointed that efforts to produce
new Blue Duck offspring had failed but said the two male birds made 'a
lovely couple'. … 'They stay together all the time, parading up and down their enclosure
and whistling to each other as a male might do with a female he wants to
mate with,' he said. 'People who visit the centre think they're a fantastic couple, without
really coming around to the idea that they are two males. They both have very big personalities and people come from all over the
country to come and see them. Cherry doesn't seem bothered by it, she's just happy to keep herself to
herself…It would have been nice to get a last clutch of eggs from Cherry but Ben
and Jerry do make a lovely couple."

No doubt the fundies will pick up on this story and use it to perpetuate their theory that gays will be the end of human civilization.