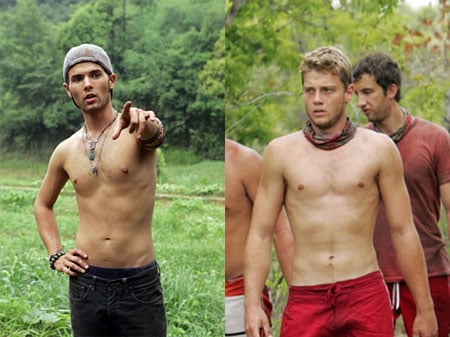 "We have
such extreme opposite tastes but so much in common. He LOVES sports and
I prefer the solo outdoors stuff, I like to dress super trendy he's
into plain T's, I love alternative music he likes Whitney! (shhh) We both love to keep active and busy, we love trying new things and
traveling. I was attracted to him the moment I saw him, mainly because
he's got this confidence that pours out of him and a piercing stare
that you can't help but notice so I went 'fishing'! Started talking
with him and reeled him in! He's coming to stay with me all next week,
and I with him next month. I'll be in New York for his finale in May
and we are planning a huge trip this summer … So hopefully things go
well! I'm like a wall that usually wont let anyone one close to me, but
he's doing a great job at breaking it down so I have high hopes."

In a recent interview with Reality Blurred, Spencer said: "I don’t like come across like most of the gay guys but I am, so I’ll probably be like—but then again, JP was gay and nobody knew
that on the show; he was about the straightest I’ve ever seen. … But I
won’t be Todd, I surely won’t be Coby. I won’t be Charlie. Holy shit. I
talked to my parents and I was like, ‘Mom, do I sound like that?’ she
was like, ‘Sweetheart, no, I would never let you go out in public if
you sounded like that.’ Thank God."