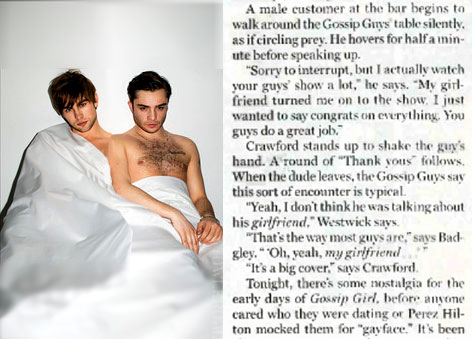 In the latest Rolling Stone cover story, Gossip Girl's male actors demonstrate that they know exactly what it's like for a gay guy to pretend that he's straight. During the interview, they mock a male Gossip Girl fan who approaches them, claiming he's using his girlfriend as a cover for meeting them.

And then, shortly thereafter, Ed Westwick (apparently unironically) uses the same strategy to (once again) deny he and Crawford are a couple:

Says Westwick: "[The rumors are] Fucking ridiculous! "It's funny because I love this fucking dude dearly. I would die for this fucking dude. He's my brother. But, by God, we are so into our women it's ridiculous. But what are you going to do about it? Get pissed off and stay home and cry about it?…I made out with a girl in public. Fuck it, I'll have sex in public. That one's still on the list. Still haven't ticked that one off. Well I have, but they haven't seen me. Not George Michael public."

Note: the photo above is a parody in case it wasn't obvious. Terry Richardson's original, from the magazine, below. 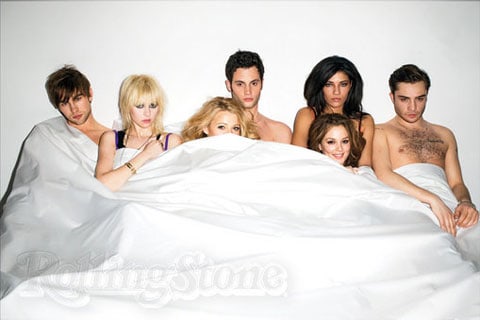