Many of you likely knew of Kevin Sessums, our theatre critic, from the celebrity profiles he has done for Vanity Fair or Allure or his memoir Mississippi Sissy, but it's likely most of you don't know he's also a regular writer for Parade, the national Sunday paper magazine, which has a fairly conservative readership, and a huge one. 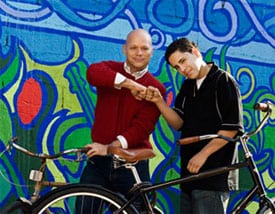 This Sunday, Parade is publishing a personal piece in the magazine about the relationship Kevin has had for seven years mentoring Brandon, a straight youngster from Brooklyn born to a teen mother. Kevin has helped Brandon grow into a teen himself. Writes Kevin: "At 14, he is now
the same age his mother was when she gave birth to him. My mentioning that to him the other day—he
really hadn’t thought about it—prompted our first grown-up conversation about forgiveness and
understanding."

Brandon has helped Kevin, who was orphaned at a young age, through some emotional tough spots as well.

Kevin says this article means more to him than almost anything he's written, and hopes it inspires more people to become mentors to kids who need it.