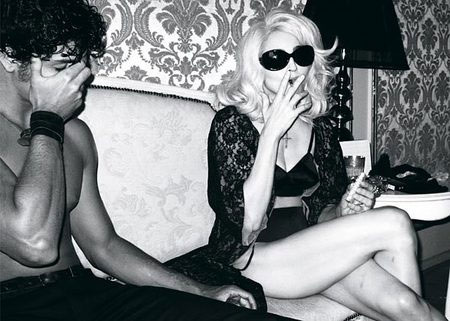 HX reports that Madonna swung by Hell's Kitchen gay bar The Ritz for a birthday party for her trainer Tracy Anderson:

"The Big M kept it quiet and cute, sipping cosmos upstairs at the
private party with her new Brazilian boy toy from that W Magazine
spread in tow. The hottie apparently
brought along a mix CD for the occasion and insisted that DJ Xavier
play the whole thing. During Bianca Del Rio’s show, a random contestant
in the 'Name That Artist' contest mistakenly identified Britney’s 'Gimme More' as a Madonna track. The crowd was aghast, but Bianca saved
the day giving Madge her blessing to come get all Chris Brown on the
ditzy chick. Just another Monday night in gay NYC!"

In related news, Madonna has reportedly received hundreds of copies of the Stephen King book and film It after it was revealed that Guy Ritchie refers to her as "It" to friends. "It" is not pleased.

Perhaps she should claim ownership and make "It" the name of her next album.