The NYT expands on a bit of news that I posted back at the beginning of February regarding the 9th Circuit Court of Appeals ruling that health benefits must be paid to same-sex partners of federal employees. It's a ruling that clashes with the federal Defense of Marriage Act, and 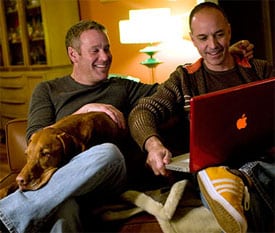 "As a presidential candidate, Mr. Obama said he would 'fight hard'
for the rights of gay couples. As a senator, he sponsored legislation
that would have provided health benefits to same-sex partners of
federal employees. Now, Mr. Obama is in a tough spot. If he
supports the personnel office on denying benefits to the San Francisco
court employees, he risks agitating liberal groups that helped him win
election. If he supports the judges and challenges the marriage act, he
risks alienating Republicans with whom he is seeking to work on
economic, health care and numerous other matters."

Obama has repeatedly promised to repeal DOMA. In an open letter to the gay community written a little more than a year ago, Obama said: "Unlike Senator Clinton, I support the complete repeal of the Defense of
Marriage Act (DOMA) – a position I have held since before arriving in
the U.S. Senate. While some say we should repeal only part of the law,
I believe we should get rid of that statute altogether. Federal law
should not discriminate in any way against gay and lesbian couples,
which is precisely what DOMA does."

According to the Times, "Federal officials said they had to follow the laws on the books (in response to the appeals court ruling). But
Richard Socarides, a New York lawyer who was an adviser to President Bill Clinton
on gay issues, said he believed that Mr. Obama 'has broad discretionary
authority to find ways to ameliorate some of the more blatant examples
of discrimination.'"

"Congress may soon weigh in" as well: "Senator Joseph I. Lieberman,
independent of Connecticut, and Representative Tammy Baldwin, Democrat
of Wisconsin, plan to introduce bills that would provide benefits to
same-sex partners of federal employees." Last week, Baldwin said the legislation was coming "shortly."

Previous Post: « Whatchu Talkin’ About, Willis?
Next Post: Jon Stewart to CNBC’s Jim Cramer: ‘Finance is Not a F*cking Game’ »