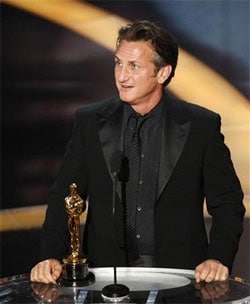 Last October, California governor Arnold Schwarzenegger vetoed legislation authored by Assemblyman Mark Leno that would have recognized May 22 as "Harvey Milk Day" in the state. The California senate approved the measure along party lines (with not one Republican vote) in August. Tomorrow, Leno will propose it again, this time with Oscar winner Sean Penn by his side:

"Tomorrow, Leno will try again with Senate Bill 572, and this time he's
appealing with Schwarzenegger's Hollywood side by tapping Sean Penn,
who just won the Best Actor Academy Award for his title role in 'Milk.'
Leno and Penn will appear at 11 a.m. tomorrow at Tosca Cafe (242
Columbus) and will be joined by Assembly member Tom Ammiano, Geoff Kors
of Equality California, activist Cleve Jones (a character in Milk and
consultant to the film), and Milk's nephew Stuart Milk."