Poet Mark Doty describes an incident over the weekend in San Francisco's North Beach neighborhood in which he and his partner, the writer Paul Lisicky, were taking an after-dinner stroll when Doty involved himself in an altercation between two drivers on the street. The woman he had scolded parked her car, came after him, and then crossed the street into a business  to emerge with a group of four big men who began pursuing them. Doty and Lisicky took refuge in a restaurant that to their misfortune happened to be owned by one of the thugs coming after them. 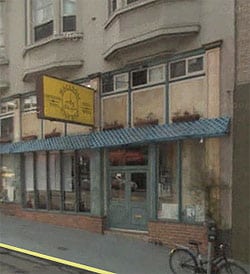 Doty writes: "And suddenly, as if a trapdoor has opened in the evening and we've
landed in a scene from The Sopranos, two guys enter the restaurant, two
more are posted just outside the door, and I've got an angry
middle-aged guy in a black shirt with flowers on it standing in front
of me and he's not happy. I cannot narrate our conversation here, as
it's all a jumble in my head. He's threatening (not necessarily in his
words but his stance and tone), he's telling me to get out, but I'm not
about to walk out onto that sidewalk with these weird entourage
bodyguard types standing there, I'm saying I'm going to call the
police. Then the strangest thing: he takes my arms and he says, 'Even
though you are who you are, you gotta think twice before you talk to
somebody.' I have no idea what this means. Does 'who you are'
mean gay man, middle-class man, entitled person? No idea. The guy's
telling me to get out of his restaurant, and somehow I make it clear
that I will not leave with those men at the door, and they move over,
and out we go, with a barrage of insults behind us — 'The Castro's on
the east side of town, get out of the neighborhood, twinkletoes, get
lost faggot' and so on."

Even Though You Are Who you Are [mark doty]