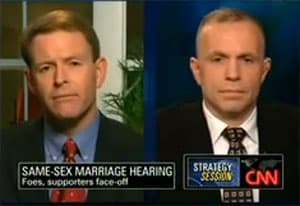 Among other things, they addressed whether it's the court's responsibility to "to protect the minority from the tyranny of the majority."

Said Signorile:  Back in1967, Loving versus Virginia, a Supreme Court case that ruled thatstates cannot ban interracial marriage. That case helped change thiscountry; 70 percent of the country was opposed to interracial marriage. But once the court ruled, people, and of course the civil rights movementand all of the other change that happened, understood that there wasnothing, the world wasn't going to change. People were re- elected andpeople needed to respect that.

Perkins responded: "Well, much different scenario; you had people who had all thecharacteristics for marriage, male and female being arbitrarilyprevented from marrying because of color. That's not the same thinghere. People who do not have immutable characteristics and that's notwhat the court is dealing with. The court is dealing with thetraditional definition of marriage and what the people of the state ofCalifornia said."