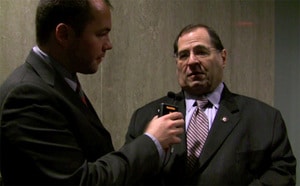 Writes the WaPo: "The strain of the status quo on gay and lesbian binational couplesshould not be discounted. Because their relationships are not legallyrecognized by the United States, some couples have resorted to illegalmarriages where the foreign nationals marry Americans to get greencards that allow them to stay in the country permanently. In othercases, Americans have exiled themselves to be with their partners.Sixteen countries, including Australia, Brazil, Canada, Israel, SouthAfrica and the United Kingdom, allow residents to sponsor same-sexpermanent partners for legal immigration. American gays and lesbiansshould not have to choose between their country and their partners."

Watch our interview with Nadler about the UAFA (recorded during the Obama inauguration festivities), AFTER THE JUMP…