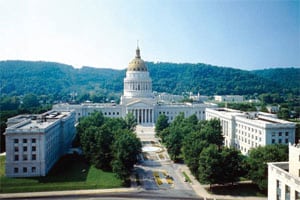 "Last year, the Senate unanimously passed similar legislation, which
adds sexual orientation to West Virginia's existing civil rights laws,
but on Friday, seven Republicans and three Democrats opposed it. The bill (SB238) would protect people from being fired or denied
housing because of their orientation. Speaking in support of the
legislation, Senate Judiciary Chairman Jeff Kessler asked his
colleagues to remember the Biblical command to 'love thy neighbor as
thyself.' … Sen. Erik Wells, D-Kanawha, pointed out that the Senate unanimously
passed 'a stronger version of this bill' last session. This year's
version exempts religious institutions. Others characterized the issue as an economic one…. [GOP Senate Minority Leader Don] Caruth said the bill would 'eviscerate' the concept of at-will
employment. He also said the bill's definition of sexual orientation
was too broad, since it protects gays, lesbians, bisexuals and
heterosexuals. That means straight people could file lawsuits claiming they were
discriminated against because they are heterosexual, Caruth said."

The bill now goes to the House.