Two Conover, North Carolina Domino's Pizza employees who videotaped themselves sabotaging food with their own bodily excretions and put the footage (which also happens to mention that they're gay) on YouTube have warrants out for their arrest. 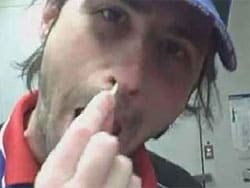 "In the last 24 hours, videos of two of Domino’s Pizza employeesappearing inappropriately within one of our franchise restaurants havebeen circulating online. Since the videos first surfacedyesterday, the two workers have been identified, fired and the affectedfranchisee has filed a criminal complaint against them, and there arewarrants for their arrest. The opportunities and freedom ofthe internet is wonderful. But it also comes with the risk of anyonewith a camera and an internet link to cause a lot of damage, as in thiscase, where a couple of individuals suddenly overshadow the hard workperformed by the 125,000 men and women working for Domino’s across thenation and in 60 countries around the world. We apologize for the actions of these individuals, and thank you for your continued support of Domino's Pizza."

What a couple of idiots. Didn't Timothy Tackett teach them anything?

Watch the videos, if you haven't already, AFTER THE JUMP…