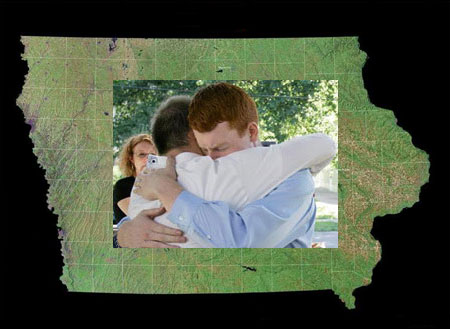 It's a great day for equality. Summary and opinion PDFs posted below.

"The Iowa Supreme Court this morning struck down a 1998 state law that limits marriage to one man and one woman. Theruling is viewed as a victory for the gay rights movement in Iowa andelsewhere, and a setback for social conservatives who wanted to protecttraditional families. The decision makes Iowa the first Midwestern state, and the fourthnationwide, to allow same-sex marriages. Lawyers for Lambda Legal, agay rights group that financed the court battle and represented thecouples, had hoped to use a court victory to demonstrate acceptance ofsame-sex marriage in heartland America. Richard Socarides, aformer senior adviser to President Bill Clinton on gay civil rights,said today’s decision could set the stage for other states. Socarideswas was a senior political assistant for Iowa Sen. Tom Harkin in theearly 1990s. 'I think it’s significant because Iowa isconsidered a Midwest sate in the mainstream of American thought,'Socarides said. 'Unlike states on the coasts, there’s nothing moreAmerican than Iowa. As they say during the presidential caucuses, 'AsIowa goes, so goes the nation.’'" 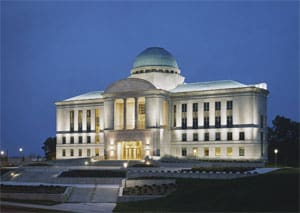 A surge of interest in the ruling crashed the Supreme Court's web servers at about 8:20 this morning, ten minutes before the ruling was set to go online.

Wrote the court in a memo: "In a unanimous decision, the Iowa Supreme Court today held that the Iowa statute limiting civil marriage to a union between a man and a woman violates the equal protection clause of the Iowa Constitution.  The decision strikes the language from Iowa Code section 595.2 limiting civil
marriage to a man and a woman.  It further directs that the remaining statutory language be interpreted and applied in a manner allowing gay and lesbian people full access to the institution of civil marriage.   Today’s ruling resolves an action brought by six same-sex couples who were refused marriage licenses by the Polk County Recorder.  Except for the statutory restriction that defines marriage as a union between a man and a woman, the twelve plaintiffs met the legal requirements to marry in Iowa. "

Justin Uebelhor, director of communications for One Iowa, the state’slargest lesbian, gay, bisexual and transgendered advocacy group, told the Des Moines Register it's likely same-sex couples won't be allowed to marry for a few months because state governments need time to put the new regulations in place: "Typically, it’s not immediate, and that’s most likely what we’d be looking at in Iowa."

UPDATE: I've been informed that same-sex couples will be able to begin marrying in 21 days.

The ruling affirmed Polk County Judge Robert Hanson's August 2007 ruling which declared the state's law forbidding same-sex marriage unconstitutional. Tim McQuillan and Sean Fritz, both Iowa State University students at the time, were the only gay couple married in the state before the ruling was stayed at the county's request.

According to Lambda Legal, the earliest any challenge to this would be able to get to a ballot is 2012 and legislators are currently not inclined to support it. Also non-Iowans can be married in Iowa. 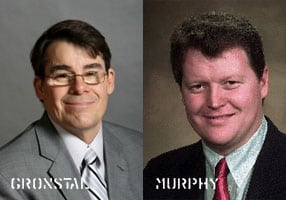 "Thanks to today's decision, Iowa continues to be a leader in guaranteeing all of our citizens' equal rights. The court has ruled today that when two Iowans promise to share their lives together, state law will respect that commitment, regardless of whether the couple is gay or straight. When all is said and done, we believe the only lasting question about today's events will be why it took us so long.  It is a tough question to answer because treating everyone fairly is really a matter of Iowa common sense and Iowa common decency. Today, the Iowa Supreme Court has reaffirmed those Iowa values by ruling that gay and lesbian Iowans have all the same rights and responsibilities of citizenship as any other Iowan. Iowa has always been a leader in the area of civil rights. In 1839, the Iowa Supreme Court rejected slavery in a decision that found that a slave named Ralph became free when he stepped on Iowa soil, 26 years before the end of the Civil War decided the issue. In 1868, the Iowa Supreme Court ruled that racially segregated 'separate but equal' schools had no place in Iowa, 85 years before the U.S. Supreme Court reached the same decision. In 1873, the Iowa Supreme Court ruled against racial discrimination in public accommodations, 91 years before the U.S. Supreme Court reached the same decision. In 1869, Iowa became the first state in the union to admit women to the practice of law. In the case of recognizing loving relationships between two adults, the Iowa Supreme Court is once again taking a leadership position on civil rights.  Today, we congratulate the thousands of Iowans who now can express their love for each other and have it recognized by our laws.

I'll be adding news reports, more reactions, and relevant video, AFTER THE JUMP…

"Today's victory is a testament to the strength of love, hope andcourage — our clients have shown an abundance of all three for manyyears and now at long last they will be able to marry. This will go down as another proud day in Iowa's long history of protecting individual rights."

"We are thrilled that the Iowa Supreme Court has done the right thing and ended discrimination against thousands of loving, committed same-sex couples by allowing them access to the literally hundreds of protections that come with marriage. We are happy that another state has joined Massachusetts and Connecticut in declaring that nothing short of full marriage equality will put an end to the hardships that many of our families experience on a daily basis. New Yorkers can now go to yet another state, get a marriage license that will be recognized as legal and valid here at home and have access to the vast majority of the 1,324 rights and responsibilities New York provides with it. We believe, however, that our families should not have to leave New York to get married; we should be able to get married here at home with our families and friends around us. Governor Paterson, the New York State Assembly and a majority of New Yorkers agree that it is time to do this. So too do both of our U.S. Senators, Attorney General Cuomo and Comptroller DiNapoli. The State Senate needs to get on board now with everyone else and pass marriage equality legislation this year."

"Today's ruling affirms that loving, committed gay and lesbian couples should no longer be excluded from marriage. GLAAD congratulates and expresses our deepest appreciation to One Iowa, Lambda Legal, the Interfaith Alliance of Iowa, and the other organizations, leaders and courageous couples whose work and perseverance culminated in today's ruling. GLAAD urges local and national media reporting on this historic story to ground their coverage in the stories of the Iowa couples whose enduring commitment is at the heart of today's decision."

"This is a truly historic day for Iowa and a proud day for everyAmerican who believes in the promise of equal rights and fairness forall. The IowaSupreme Court did its job by recognizing that gay and lesbian coupleswho form committed relationships and loving families deserve the samelevel of respect afforded to heterosexual couples.  The unanimous courtmade forcefully clear that the state constitution guarantees the samerights and protections for all Iowans. This decision strengthens Iowafamilies and makes a strong statement for equality all across thenation."

"This ruling marks another watershed moment in the struggle for fullequality. No longer will same-sex couples have their relationshipstreated as less than equal by the state. The court rightly affirmedthat no loving committed couple should be denied marriage and thecritical protections only marriage can provide. This ruling alsoaffirms our common humanity by providing same-sex couples with theopportunity to participate in the shared hopes and dreams of making apublic commitment to the person they love. We are thrilled thatequality has come to Iowa!"