The NYT yesterday ran a piece on New York Senate Majority Leader Malcolm Smith and the pressure cooker he's in on marriage equality — on one side he's got Governor David Paterson pressuring him to move the marriage equality bill forward, and on the other a spiritual "mentor" he has known for more than two decades, Reverend Floyd Flake. 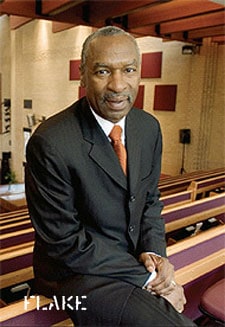 Said Flake to his congregation this Sunday: “I don’t care what the politicians think. Ain’t nothing perfect about laying down and signing a license with somebody who got the same body parts you got."

The paper reports: "Mr. Smith, who went to work for Mr. Flake in 1986 as a Congressional
aide, said the minister’s views on the subject have not weakened his
own resolve to see same-sex marriage legalized. Though they speak
nearly every day, the two men said they have not broached the topic
recently. 'He knows what my position is. I know what his
position is,' Mr. Smith said. 'He looks at it as a religious matter,
and I look at it as a legal matter.' Mr. Smith said he arrived at
his decision to support same-sex marriage two years ago when he began
considering it a matter of equal rights."

In related news, two thousand people are expected tomorrow in Albany for the Empire State Pride Agenda's Equality and Justice Day of lobbying for marriage equality.