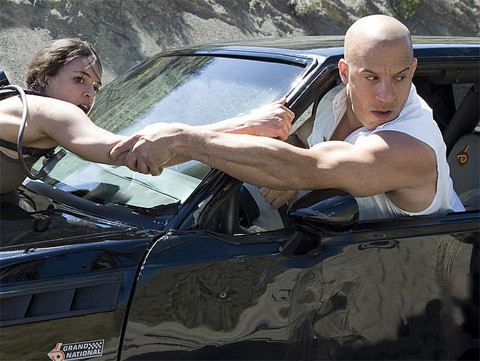 Nathaniel Rogers is older than Penélope Cruz, younger than Nicole Kidman and has neither dated nor signed a contract with Tom Cruise. He blogs daily at The Film Experience. This week, Nathaniel begins a weekly film column here on Towleroad.

Take One. Opening This Weekend

FAST & FURIOUS is undoubtedly the weekend's biggest curiosity and probably the biggest draw at the box office. You have to admire the great tag line "New Model. Original Parts". Brevity being wit and all. Nevertheless will people really be nostalgic for speed racing, circa 2001? The Los Angeles Times has an interesting take on the odd math behind the high box office expectations for a Vin Diesel / Paul Walker reunion though both careers seem to be on the skids. Meanwhile, gay audiences can be amused with the onscreen romantic reunion of muscle man Vin  "I prefer to date in Europe" Diesel and tough girl Michelle Rodriguez, both of whom have never successfully convinced anyone about which team they're playing for. Offscreen that is. Onscreen they're totally into each other. Team Fast. Team Furious.

ADVENTURELAND is director Greg Mottola's follow up to his comedy hit Superbad. Jesse Eisenberg (The Squid and the Whale) moons over screwed up Kristen Stewart (Twilight) …but not in a vampiric way! They work their summer at an amusement park in the 80s. The setup / location reminds one happily of the great coming of age gay flick Edge of Seventeen though obviously the movies will be nothing alike. 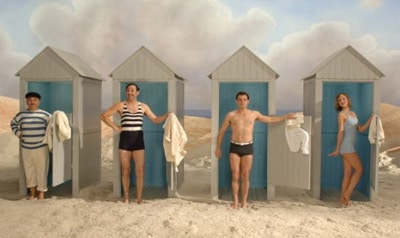 In limited release, there are always more options. Missing the movie musical? There's a new French film called PARIS 36(pictured left) which is about the reopening of a music hall in, youguessed it, Paris 1936. There's also the Dominican baseball player drama SUGAR,from the team that brought us the very memorable Half Nelson which won Ryan Gosling an Oscar nomination a few years back. If you've been missing Will & Grace, you can catch Will (er, Eric McCormack) in the sci-fi 50s era spoof ALIEN TRESPASS. The filmmakers, who were delightfully giddy about their movie at this year's Comic Con, promised big laughs when the alien is revealed (think penis). GIGANTIC is a romantic indie comedy starring There Will Be Blood's Paul Dano as a young salesman. He falls for Ubiquitous Movie Girlfriend Zooey Deschanel. She's racking up quite a list of man conquests: Jim Carrey, Joseph Gordon-Levitt, Mark Wahlberg, Casey Affleck and Weeds' Justin Kirk. That's just in the past 27 months. Jealous?

What does Brüno wield (I'll give you one guess) to f*ck the MPAA with in his new red band trailer? How do you say "F*ck Jeff Goldblum" in French? And which filmmaker, who f*cked with Jeff Goldblum (onscreen!) in the 1980s, was just honored in France?

TV's low rated but quite excellent Friday Night Lights may be losing some of its hunkiest actors as the football stars leave for college or movie careers (paging Taylor Kitsch!) but it's been renewed for two seasons anyway, y'all. We hope this means more screen time for the show's sole gay character, Devin Corrigan (Stephanie Hunt) who gently crushed the crushing Landry (Jesse Plemons) earlier this season when she told him she was into girls. This show is adept at spinning drama from everyday conflicts and the formative growing pains of the high school years so point those cameras Devin's way, please.

Remember when James Franco told a reporter at the SAG Awards that it was easier to love Sean Penn onscreen in Milk than pretend to be high in The Pineapple Express… on account of he was in love with Sean Penn?! Well, his next film does not involve loving Sean Penn, just getting high again.

ShoWest wraps in Vegas with sneak peeks at Robert Downey Jr as Sherlock Holmes, Woody Allen's Whatever Works (apparently Woody is really into threesomes now), Pixar's Up and more…

The red band trailer for Sacha Baron Cohen's Brüno which was posted on Towleroad yesterday. Here it is again if you missed it! 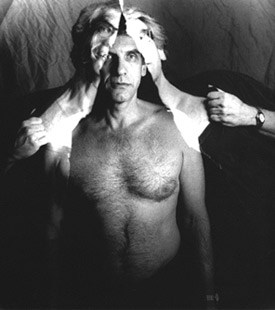 Speaking of the French… Notorious Canadian filmmaker David Cronenberg has just received the French Legion of Honour. His filmography is undervalued stateside where his taste for body horror and preference for sexually charged genre films makes people highly uncomfortable… but the French love him. So should you. After all, he brought us Debbie Harry (as an actress!) living in "a highly excited state of stimulation" in Videodrome (1983), got Jeff Goldblum naked and delivering his best performance in The Fly (1986), gave Jeremy Irons his ideal screen partner (Jeremy Irons!) in the incestuous twin gynecologists classic Dead Ringers (1988), threw Holly Hunter, Rosanna Arquette, James Spader and Elias Koteas into mangled cars and compromising positions in the polysexual Crash (1996… i.e. the good one, not the one that stole Brokeback's Oscar) and recently gifted the great Viggo Mortensen with two of his three best roles (A History of Violence and Eastern Promises). He's deserving of honors. Vive la France.

Cronenberg also announced this week that he will be making a sequel to his Russian mafia thriller Eastern Promises (2007). The screenplay has yet to be written. Its biggest hurdle will undoubtedly be finding a way to top Viggo Mortensen's famous naked steam room death match in the original. 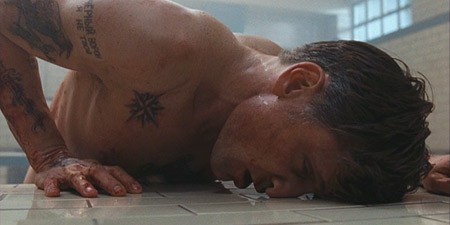 Good luck to them with that. Should they merely opt for a reprise of the scene I humbly offer my services as key grip.

Previous Post: « Madonna Denied Adoption by Malawian Court
Next Post: How You Can Help Ben Affleck with His Hangover »