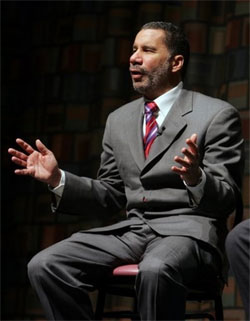 "The announcement will take place at 10 a.m. on Thursday at Mr.
Paterson’s office in Midtown Manhattan, said people who were briefed on
the governor’s plans but who asked not to be identified because they
did not want to upstage the governor. The fact that Mr. Paterson is introducing a bill does not, however,
mean that action in the Legislature is imminent. It could take months —
even longer — before the bill makes its way through the appropriate
committees and onto the floor of the Senate and the Assembly."

Paterson's remarks last week that he was introducing the bill and wanted lawmakers to vote on it this session caught some legislators off guard, according to NY Daily News reporter Elizabeth Benjamin:

"The governor's approach is actually antithetical to the
behind-the-scenes lobbying effort being waged by the gay marriage
advocates, who were so concerned the GOP would use this potentially
controversial topic as a wedge issue that they all-but refused to talk
about it during the 2008 campaign, even as gay money poured into the
Democrats' coffers and helped them win the majority. As expected, marriage became a key point in the Senate leadership
fight, with Sen. Ruben Diaz Sr. flat-out refusing to support Senate
Majority Leader Malcolm Smith unless he would promise – in writing –
not to let the bill come to the floor…In response to Paterson's comments, Smith spokesman Austin Shafran
released a statement saying 'something of this importance demands more
than a symbolic gesture or empty rhetoric' and reiterating the leader's
pledge that the marriage bill will be allowed to come to the floor when
32 senators have agreed to vote 'yes.'" 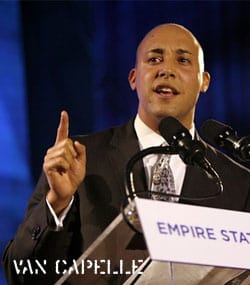 Paterson said in radio interviews last Thursday that he wants public debate on the issue: "I’m going to put the bill out and just let people fight it out. If it loses, it loses. And let the parties on both sides have their say. Inevitably, the inertia is that the public will accept this."

Alan van Capelle of the Empire State Pride Agenda, whose Equality & Justice lobby day at the state capitol is coming up later this month, expressed concern about Paterson's strategy: "Why would you want people to vote on something that you knew wasn’t going to get passed? We’re not interested in making statements."

The legislation Paterson will introduce is reportedly the same bill introduced by his predecessor Eliot Spitzer in 2007.

City Room adds: "While Mr. Paterson has said he would like to see lawmakers “fight it
out” and debate the bill on the floor of both houses even if it fails,
Albany tradition dictates that the bill is likely to come to a vote
only when it has enough support to pass. Senator Thomas K. Duane,
a Democrat and the bill’s chief supporter in the Senate, has said he
opposes the governor’s notion of fast-tracking it. And the Senate
majority leader, Malcolm A. Smith, has said he would bring the bill to the floor when it has enough support.