Here's something I missed late last week. Gary Jules, who covered Tears for Fears' "Mad World" for the film Donnie Darko in 2003, talked to SeaCoastOnline  about watching Adam Lambert cover it on American Idol last week: 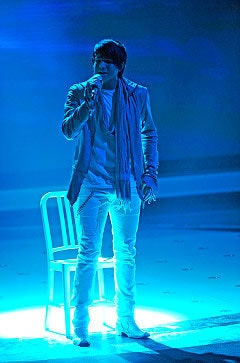 “I was actually sneakily watching it. I heard the piano
line at the beginning — if you’re me, that means ‘time to wake up.’ I said 'I knew he was going to do it.' I knew it! He’s cool and he’s kind
of emo-y and has black hair and seems sensitive. That’s who would have
that song in their lexicon. He totally understood the
vibe of it and the power of it and delivered it in a unique and
beautiful way. … I think Adam is straight-up the most interesting,
for my personal taste, of anyone I’ve ever seen on the show….I think the reason [the song is] so powerful is everybody from the kid getting
beaten up every day, to the gay kid at the high school … to the
cheerleader dating the quarterback … to the guy in a suit, feels
their thing is hard and they feel alone in their experience on the
planet. … Regardless of who’s singing it, if it comes from that
place, it can be a really powerful thing. I think Adam sang it from
that place.”

This week's Idol  features "Songs from the Cinema" with guest mentor Quentin Tarantino.