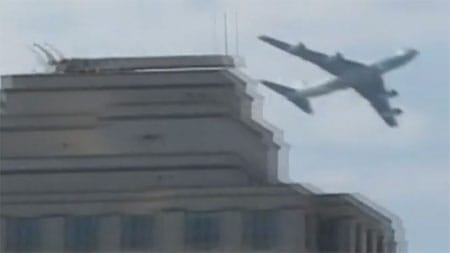 Everybody's "furious" (rightly so) about the taxpayer-funded photo-op of the Air Force One jet that caused evacutations and scared the crap out of lower Manhattan yesterday. If you want to see a typical reaction, check out the video, AFTER THE JUMP, top left.

NYDN: "A "furious" Mayor Bloomberg denounced the dunces who dreamed up the stunt – and the NYPD officials and bureaucrats who never told him about it.By day's end, an obscure City Hall deputy named Marc Mugnos, who makes $60,000 a year, was taking the fall for not telling Bloomberg that the low-flying planes were coming. He was reprimanded"

AFTER THE JUMP, a couple plane videos, Bloomberg, and Maddow's report.